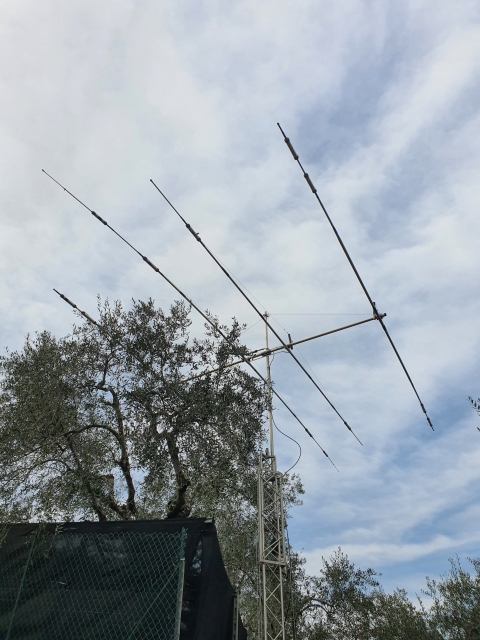 At the end, and after a long search I found it!

In 1992 I bought my first Beam, it was the Yagi 3 Element Beam from an Italian factory called ECO ANTENNA; this antenna is a very samrt solution for who has not much space …. still a nice beam antenna but fit ok also in small places.

This antenna served me now for 30 years almost consequently, and he never, and I say never, gave me trouble ! So it is a big pity to say that this factory is no more existing since many years, becasue the construction was really amazing … very robust, SWR 1:1 on the 3 band, and was also possible to make some activity on 18. Mhz with the help of the tuner.

Meanwhile I am very proud to say that I was able to get 244 Country for my DXCC !

Recently I was really determinated to change the Beam and start looking for something different; an antenna that allow me to works more band. And after a long search, one day I found what I was really looking for….

When I found it, I bought it in 10 minuts ! I was very lucky to meet a wonderful person, and we did the deal.

Moreover, the installation was not simple, as around my tower I have several trees; so was no more possible to let go down the antenna as was in the past…. but lucky me, I have very good friends !

So it tooks about 4/5 days of hard hard job, but at the end we was able to build up !

I have to say during the installation I had several “dark moment”, as seems not possible to install it becasue the trees. But my friend IZ1YSB Mariano was so determinated and he persisted and preserved until success !

In conclusion, my beam is there !!! And in the first week of job, get me already an Absolute New One and several New One Band ! Works really great !